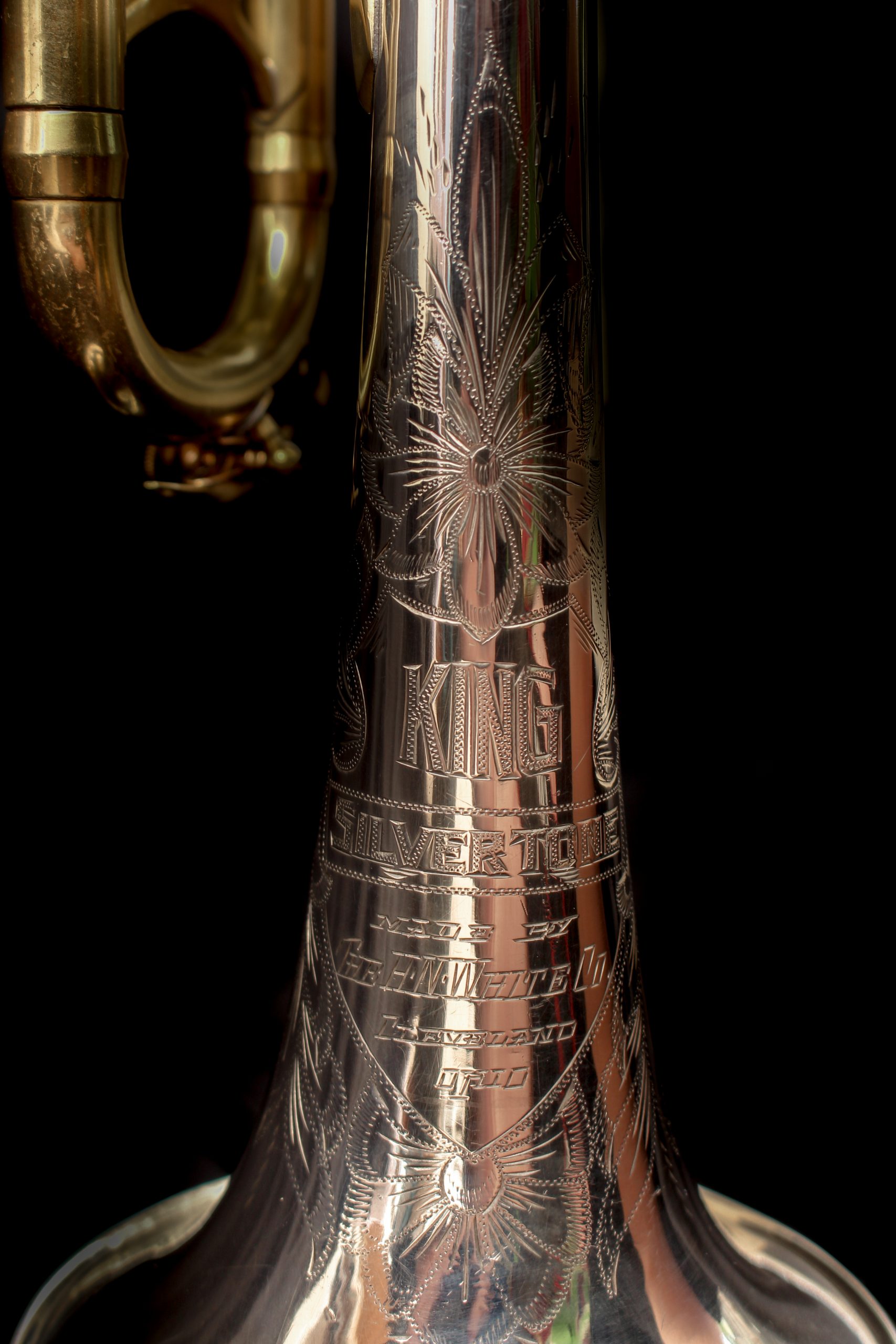 I looked long and hard for this gorgeous show-stopper expecting it to be on par with a Bach Stradivarius.  The Silvertone exceeded my expectations by a fair margin.  The warmth and clarity of sound is a notch above a Strad and, over-all, I found it easier to play.   It is free-blowing, but with a well-centered tone and it can take a fair amount of air.  Despite the sterling silver bell, it is not all that heavy to hold and did I mention it is just exquisite to see?

Care was taken to make every part of this instrument aesthetically beautiful from the sculpted mouthpiece receiver to the valve caps and decorative slide bracing.  The Art Deco floral engraving on the bell announces its vintage character and it will probably draw some attention from your wide-eyed band mates.

Structurally, the Silvertone has some unusual features.  The slides are constructed of very soft brass and they are easily bent.  This horn has one slide with a very small internal fracture. Luckily, it does not seem to affect the instrument's playablility and it is located on one of the less-used joints, the second of three telescoping parts on the main tuning slide.  The valves work smoothly and are performance-ready.  I wish I could have had this trumpet when I was in college.  Alas...

While it’s clear that both the trumpet and saxophone have been integral to jazz music’s development, the former instrument has arguably been the more important of the two.  That’s because in jazz, all roads lead back to one man – Louis Armstrong.  Not only one of the best jazz trumpeters of all time, Armstrong was one of the greatest musical improvisers ever and his innovations helped jazz to evolve into what it is today.  As Miles Davis once said: “You can’t play nothing on modern trumpet that doesn’t come from him.”

“You can’t play nothing on modern trumpet that doesn’t come from Louis Armstrong.”Miles Davis

VIDEO: The Top Ten Jazz Trumpeters of All Time

Born Chesney Henry Baker, on 23 December 1929, in Yale, Oklahoma, Baker was drawn to music at a young age, aided by the fact that he was born into a musical family (his father had once been a professional guitarist and his mother played piano).  A Jack Teagarden fan, his dad bought 14-year-old “Chetty” (as his mum called him) a trombone to play, but it proved too unwieldy for the young man so he swapped it for a trumpet, discovering a natural affinity with the instrument.

In 1946, when he was 16, Baker joined the US army, where he honed his horn skills playing in military bands.  On leaving the army, in 1951, he set up camp in Los Angeles and started playing in jazz clubs on the West Coast.  He soon started to make a name for himself with a lyrical trumpet sound influenced by Miles Davis and which proved the perfect foil for the more effusive style of saxophonists Stan Getz and Charlie Parker, with whom Baker played in the early 50s.

““I don’t believe that jazz will ever really die. It’s a nice way to express yourself.”Chet Baker 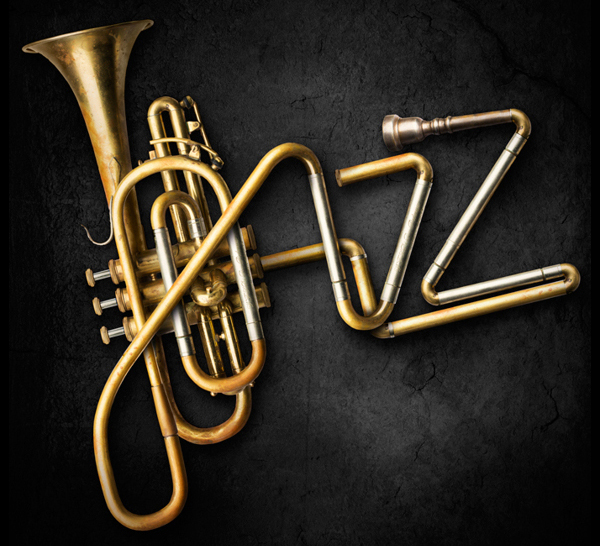 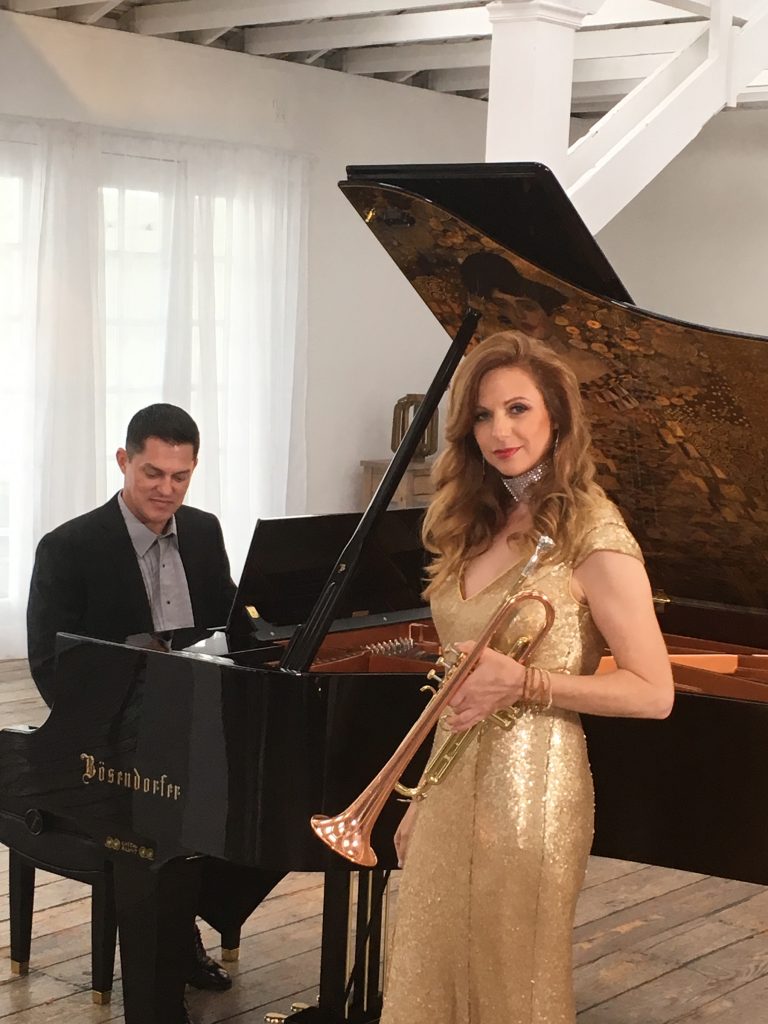 Finding the right professional trumpet is not an easy task.  I know because when I wanted to buy an upgrade from my trusty Bach Strad, I experienced all the frustration you might be feeling right now even though I already had a PhD in music!   The great jazz models are not often in stock in local stores and those cool vintage models everyone talks about are not in the local pawn shop.  Of course, you can order a couple new horns online if you don’t mind maxing out your credit card, and then hope they arrive in time for you to try them back-to-back.  Those are your options unless you know a guy.  You know, that guy who sells trumpets out of his basement and who everyone except you seems to know?  My situation as a lady made seeking out this mysterious guy with a bunch of trumpets for sale even more uncomfortable.  I just did not feel good about visiting a stranger’s basement, so I ordered my new horns online and I loved them.  But for years I wondered what I was missing.  Was the legendary Martin Committee, or maybe an Olds Recording model really the trumpet for me?  How would I ever find out?  The only way to know was to become a technician myself, invest in a bunch of instruments and open my own shop.

I have a played the tumpet for over thirty years, earned a PhD in musicology, directed college bands and orchestras and, late in my career, developed a deep passion for jazz improvisation.  Whether you are a student, a parent of a young performer, a hobbyist or a seasoned professional, I can help guide you to your ideal instrument.

My gallery is a brick-and-mortar shop where you do not have to know a guy in order to try out amazing instruments.  I keep a wide variety of pro models in stock, some new and many vintage, so you can find your perfect fit.  Experience has shown me that when you buy vintage horns online, there is a good 60% chance that it needs major valve work in order to be at pro-level playing condition.  Listings that report that “all the valves work” are not fictitious, but that  doesn’t mean the valves are in good playing condition and even a picture of the valves outside the casing will not guarantee the smooth, lightening action you need.  That is why I condition each horn in the gallery for immediate performance, and that is why I only sell instruments that I like to play myself.

I searched a long time for this trumpet for its shear aesthetics.  The details on the King Silvertone are gorgeous from its designer slide bracing to the art nouveau engraving on its sterling silver bell.

This is an excellent all-purpose performer that is at home in a symphonic ensemble as much as in a big band.  A definite upgrade from the  Bach Stradivarius, the silver bell gives the Silvertone a warm sound and its precise slotting focuses each note.